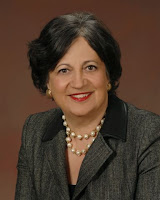 Mary Nichols, Chair of the California Air Resources Board, was the Keynote Lunch Speaker at the Shaking the Foundations Conference at Stanford Law School October 16, 2009.
By the way, I initially saw Mary speak at a 2007 UCLA Evolutionary Change in Human Altered Environment Conference where she was Professor of Law and Director of the Institute of the Environment. That conference, where worldwide scientists spoke of habitat and species loss, influenced me to leave an eight-year silicon valley Fortune 500 software career in May 2008 and start Green Star Solution targeted to helping people, businesses, and governments reduce climate emissions and increase biodiversity.
The Stanford Law Students who planned this Shaking the Foundations Conference are definitely walking the talk from an environmental perspective by the lower carbon vegetarian and vegan fully compostable lunches provided. The delicious vegan roasted tofu, sweet potato, and onion sandwich on whole wheat bread was served with water in bottles made from plants! The water bottles are also completely recyclable and go into the same recycled containers for plastic and glass bottles.
Mary Nichols was introduced noting her long list of accomplishments as well as the fact she took public transportation all the way from Sacramento to Stanford which was not easy!
Mary's impressive Keynote included the following highlights:
More information on California's Climate Change Program is here.