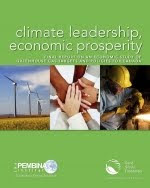 Climate Leadership, Economic Prosperity is the first Canadian study to comprehensively examine how Canada can succeed economically while meeting and exceedng targets to reduce global warming pollution, according to an economic modelling study commissioned by the Pembina Institute and the David Suzuki Foundation.

Leading economic modeling firm M.K. Jaccard and Associates, on behalf of the Pembina Institute and the David Suzuki Foundation, conducted an in-depth study of federal and provincial policies needed for Canada to meet two targets to reduce its greenhouse gas emissions.

"This new analysis shows that with strong policies, Canada can meet a 2° C target in 2020 and have a strong, growing economy, a quality of life higher than Canadians enjoy today, and continued steady job creation across the country," says Dale Marshall, climate change policy analyst with the David Suzuki Foundation.

Far stronger policies than the federal government has proposed to date must be implemented, according to the modeling study. "Meeting either target requires governments to put a significant price on global warming emissions broadly across the economy, and to back this up with strong complementary regulations and public investments," says Matthew Bramley, director of climate change for the Pembina Institute. "The study indicates that Canada can implement much stronger climate policies than the U.S. and still prosper economically."

Key findings of the Jaccard study include:

* Canada's gross domestic product would continue to grow at 2.1 per cent per year on average between 2010 and 2020 while meeting the 2° C target, compared to 2.2 per cent for the government's target and 2.4 per cent under business as usual.
* Canada's total number of jobs would grow by 11 per cent between 2010 and 2020 while meeting either target -- essentially the same rate as under business as usual.
* The urgent need to address very high emissions in Alberta and Saskatchewan would significantly reduce projected growth rates in these provinces. However, Alberta's per capita GDP would continue to be much higher than that of any other region, and Saskatchewan's per capita GDP would stay close to the Canadian average.
* To meet the 2° C target, a carbon price would start at $50 per tonne in 2010 and reach $200 per tonne by 2020. To meet the government's target, the carbon price would need to reach $100 per tonne by 2020, or $145 per tonne if Canada does not purchase any international credits.
* Almost half of carbon price revenue can be returned to Canadians through reductions in income tax. Revenue from carbon pricing can also fund major public investments to reduce greenhouse gas emissions, such as building smart grids and transit infrastructure.
* Technological approaches to achieve major reductions in Canada's greenhouse gas emissions range from increased energy efficiency to renewable energy.

You can download the full Climate Leadership, Economic Prosperity report here but avoid printing it for the planet's benefit: http://climate.pembina.org/pub/1909
Posted by Mary Vincent