KQED/KTEH Panel - Is Silicon Valley Going Green: Is Green Living Up to its Hype? 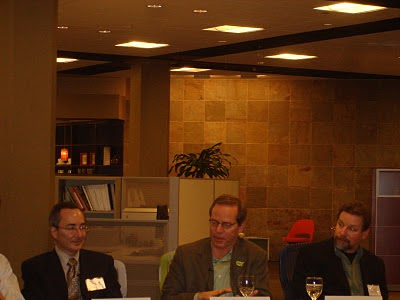 The Panelists discussed the following Trends:
Curtis Snyder says architects are embracing design i.e. workers prefer controlling their room temperature and Sutter patients commented they just feel better being there in the building. Per Snyder, "We have a responsibility to make design beautiful." In addition, Snyder says there are now 20,000 US Green Building Council members. He says there is a public perception that it costs 17 percent more to build green, but it's only 1.5 percent.
Snyder says that Building Information Modeling is also a trend: "We need to design in intangibles..this place makes me feel better and do my work better."

Craig Miller says "Big important, sweeping policies are not happening. In 2010, more people are preaching to the choir, and there is an acceleration of that. There is a polarization of attitudes toward science...not scientists..but politicians. There is a policy showdown, and we're running out of time, i.e. attacks on carbon legislation, attack on epa's right to regulate greenhoise gas emissions. This is a Year of Reckoning."

Kevin Surace, also Inc Magazine's Entrepreneur of the Year, said "a few years ago, buildings weren't even looked at as green; now there is a trend to energy efficiency and saving money.  A building built 5 years ago sells for 20 percent more today."
He's currently replacing all the windows in the Empire State Building, and they are recycling the old windows to produce energy efficient windows. Kevin stated, "because of Polarization, Economics is the answer; talk about Energy Independence."


Barry Cinnamon stated "we need to make sure we fix the economics; a solar payback is now in the 5 to 7 year range. It's necessary to focus on policies locally and nationally. California's been good with tax credits, P&G has been very cooperative, installation costs are coming down, and it's easier to install solar, i.e. Lowes Hardware Stores are carrying solar products."


I think Silicon Valley is living up to the Green hype, but we need to do more, and so does the rest of the U.S. and the World.