BARTLETT, N.H., March 18 — As they do every March at the town meeting here, residents debated and voted Thursday on items most local: whether to outfit the town fire truck with a new hose, buy a police cruiser and put a new drainpipe in the town garage.

Skip to next paragraph 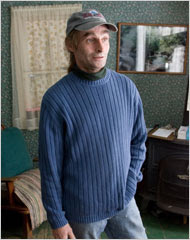 Tim Shellmer for The New York Times
Doug Garland, a selectman in Bartlett, N.H., who owns a snowshoeing and cross-country skiing area, supports a resolution on climate change being considered at town meetings across the state. “We like to get snow,” Mr. Garland said.

But here and in schools and town halls throughout New Hampshire, between discussions about school boards and budgets, residents are also considering a state referendum on a global issue: climate change.

Of the 234 incorporated cities and towns in New Hampshire, 180 are voting on whether to support a resolution asking the federal government to address climate change and to develop research initiatives to create “innovative energy technologies.” The measure also calls for state residents to approve local solutions for combating climate change and for town selectmen to consider forming energy committees.

“This is an important issue to people in New Hampshire; it’s an environmentally friendly state,” said Kurt Ehrenberg, a spokesman from the Sierra Club’s New Hampshire office. “One of the driving factors here is the lack of federal leadership on this issue, and it’s forced people to find a solution on the local level.”

While the resolution is nonbinding, organizers hope to use it to force presidential candidates to address climate change during the New Hampshire presidential primary.

“We’re trying to bring to the attention of presidential candidates that we are concerned about this in little purple New Hampshire,” said Don Martin, 61, a real estate agent in Bristol who helped collect signatures to put the initiative on the agenda in his town, where it passed by a wide margin. “New Hampshire is fairly middle-of-the-road to conservative, and if we’re concerned about this, then maybe you guys should pay attention to it.”

As of Sunday, 134 towns had passed the initiative; some had yet to hold their meetings.

The New Hampshire Carbon Coalition, a bipartisan citizens group led by a former Republican state senator and the former chairman of the state Democratic Party, spearheaded the initiative to have climate change considered at town meetings. The last time voters in New Hampshire focused on a global issue at such meetings was in 1983, when more than 100 towns asked that the federal government do something about acid rain, which was polluting the state’s waterways.

A handful of towns often take up national issues at their meetings, said Steve Norton, executive director of the New Hampshire Center for Public Policy Studies, an independent state policy group, but “this is definitely a little more rare.”

“It might be somewhat normal for a town to take on a national initiative,” Mr. Norton said, “but not half the towns in the state.”

Here in Bartlett, a town of about 2,200 people in the White Mountains, the measure passed almost unanimously at the Thursday meeting. Bartlett’s interest is both economical and environmental: best known for its ski areas, the town suffered from a lack of snow last year and in the first half of this winter.

“We have a vested interest in climate change here. We like to get snow,” said Doug Garland, a town selectman who owns a snowshoeing and cross-country skiing area.

David P. Brown, a professor of climatology and geography at the University of New Hampshire, said that the state’s average winter temperatures had risen over the past 30 years and that snowfall had decreased. “Every reputable climate model projects a continued warming for New England,” Professor Brown said, “and I expect that trend to be mirrored in New Hampshire.”

While the resolution has been supported widely, not all voters have approved of it. Gene Chandler, a selectman in Bartlett, said he did not think national issues should be brought before town meetings.

Tom Naegeli, 74, of Mont Vernon, voted against the measure in his town meeting. It passed overwhelmingly. “I just don’t think it should be in the town meeting at all,” Mr. Naegeli said. “I don’t see any evidence of global warming.”

Barry Rabe, a professor of public policy at the University of Michigan who tracks local climate change initiatives, said that Colorado and Washington had passed renewable energy standards by ballot initiative and that Texas had held hearings on the issue.

Mr. Ehrenberg, of the Sierra Club, said he and others hoped the votes would send a message that change could come from the bottom up.

“Those bumper stickers you see,” he said, “ ‘Think globally, act locally’ — this is really the embodiment of that.”