Bhutan's Environmental Leader Dasho Paljor Jigmie Dorji presided at Bhutan's Global Tiger Day Sunday July 29, 2012 and gave an inspirational speech to the residents of Trongsa, Bhutan asking the people "to please cooperate as we can do nothing/achieve nothing without their consent, cooperation and participation" to save the tiger.

We met during Global Tiger Day and discussed and demo'd the work our Global Health Research Foundation (GHRF) Team is doing on a mobile health and environmental application called Patient Outcomes and Environmental Monitoring System (POEMS) specifically developed with Bhutan. He asked me to be on his Radio Show the following day where I also spoke about our Project. 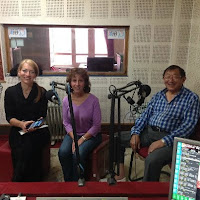 During our Radio Interview, I learned much more about the forward-thinking and significant environmental work Dasho Paljor Jigmie Dorji has done and continues to do in Bhutan. He also mentioned he saw the signs of Climate Change in the 1970's.

By the way, many people I talked with in Bhutan are seeing unusual weather patterns, and some can plant rice in areas they couldn't in the past. I also received a book produced by the World Wildlife Fund (WWF) and Wangchuck Centennial Park entitled: Climate Change: Vulnerability Assessment of Wangchuck Centennial Park, Bhutan, and Kinzang Namgay, Country Representative WWF Bhutan describes Climate Change as a "grave concern for Bhutan's people, wildlife, and ecosystems as it challenges efforts to protect and conserve biodiversity and also reduce conditions of poverty". In addition, "Together with the risk of landslides and soil erosion, glacial lake outburst floods (GLOFs) threaten Bhutan. In 1994, Bhutan experienced a catastrophic GLOF in Punakha Valley." 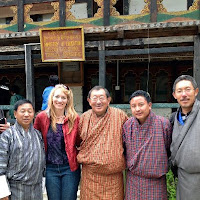 Learning about Dasho Paljor Jigmie Dorji's work during our Interview was greatly inspiring to me,  therefore, it was my turn to ask Dasho Benji for an interview.  :)

I asked him what inspired and influenced him to start and continue his wonderful work, and I'm sure you'll be impressed with the insights he gives below. Please see the Video Interview in 2 Parts as well as his Speech from Global Tiger Day (in the Dzongkha language for Bhutanese speakers).

Dasho Paljor Jigmie Dorji: The Earth thanks you for the important work you do!

Also see below a recent World Wildlife Fund Bhutan Tiger Video of a Mother Tiger and her Two Cubs taken in the Spring of 2012.