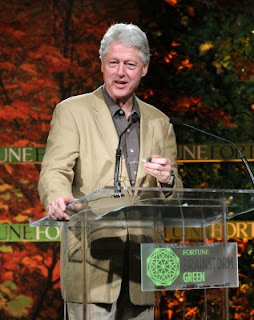 By Mary Vincent - Follow on Twitter @MaryVincent
Bill Clinton spoke on Earth Day, April 22, 2009 at the Fortune Brainstorm Green Conference. I was fortunate to attend the Conference and briefly meet him. He shared data points and perspectives regarding the global economy, his Clinton Climate Initiative success stories, and what WE can do.
Quotes:
From my perspective, some of Bill Clinton's best quotes are here:
"For those of us that don't have a vote in Congress or Copenhagen ... the most important thing we can do is to do."
"Income inequality has increased every year in the United States except for four...the four years of my second term...If you're a rich country in an open world, you've got to have a source of new jobs every five to eight years. I am convinced that if we do this energy thing right, it will generate not only enormous numbers of new jobs and economic prosperity for countries at every income level, it will cause people to reimagine how they do everything. And therefore the funds will flow naturally to healthcare, and the emerging economy will create a demand for higher levels of education. I basically have always believed that work is the best social program and I think as it happens saving the planet from the threat of climate change will create more work, more jobs, more ideas, and more positive interdependence than anything else we can do."
"The most important thing you can do is to prove that the transformation can be good economics."
Climate Initiative Work:
He went into great detail about the Climate Initiative's work.
Bill Clinton says that long-term tax credits and utility-financed energy innovations are needed, including more upgrading on the electrical grid. State and localities should implement new building codes, public retrofits, and local governments should create a new market for cars, i.e. 15% hybrids. In the Private sector, Clinton says that Walmart cut 5% of the packaging which equals 211,000 diesel trucks off the road (U.S. annually).

Bill Clinton invited the attendees to attend his Clinton Global Initiative Annual Meeting September 22-25, 2009, which describes itself as the only venue where business, government, and civil-sector leaders work together to plan and launch specific projects and Commitments to Action to address global economic, environmental, and social challenges.