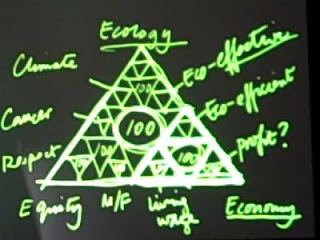 My highlights, pictures, and videos from William McDonough's Greener by Design San Francisco May 19, 2009 keynote are below. The Greener by Design conference was the second annual conference on the intersection of sustainability, innovation, and profitability in product design.

Rights of Nature
"The question is, what do we do about the rights of nature to exist?" "How do we love all of the children of all species for all time?" William McDonough, Founding Principal, McDonough + Partners and Cradle to Cradle author, said during his Greener by Design May 19, 2009 keynote called the Cradle to Cradle Revolution.

McDonough described how he was working with one of Ford Motor Co's buildings and installed a roof habitat. During the design process, one focus was on the rights of nature. Five days after the green roof installation, birds appeared and were laying eggs. The roof provides habitat, oxygen, changes color with the seasons, and invites species to return.

Triple Top Line
He discussed the Triple Top Line concept (instead of triple bottom line): Ecology, Equity, Economy. "Instead of managing only the bottom line; think about extreme conditions of equity and ecology and revenue." In order to do this, he thinks we need to become native to place. "What does it mean to be native to place? You're not leaving...You're becoming indigenous people to the planet."

"What else do we know? 48% of the anthropogenic carbon dioxide is not in the atmosphere; it's in the oceans since 1850. Historic PH of the oceans was between 8.8 and 8.2. It's now at 8.06 and expected by the end of the century with current carbon releases it will be 7.9 PH. At 7.9 PH, the coral reefs will dissolve and crustaceans can't form shells and they drop out at the bottom of the food chain. If by design, our intention is to fill the oceans with plastics, to acidify the oceans to the point we drop out the bottom of the food chain, to cause climate change and ocean rise, to persistently detoxify, and to have endocrine disrupters in our products.
If that is not our plan, than what is our plan? If we say we came here today and say we didn't intend to cause climate change but we did defacto than we got this defacto plan that's happened because we didn't have another plan. I think what's exciting for me about the people in this room, is that you have another plan."

Being Less Bad Is Not Being Good
Another theme was: "Being less bad is not being good. It's being bad, just less so. i.e. a company came to them and said we've saved 200 million dollars, i.e. we've used postindustrial waste, saved water, saved energy etc. but that was good management and being efficient. That was something they should have been doing anyway. It's not an eco program.
What we're looking at is the idea of abundance instead like looking at a cherry tree in the spring and say look how wonderful that is and how abundant that is but we don't bemoan it's inefficiency. We don't say, oh my god, how many blossoms does it take? You don't think about it that way. You don't listen to Mozart and listen to the music and say oh, how many notes does it take? You could have hit them all with a 2X4 and hit them all at once. It would have been efficient, but would we love it? This idea of celebrating abundance is very important."

"The difference between efficiency and effectiveness is Leadership."

The Cradle-to-Cradle mindset and certification process he helped develop analyzes products based on 19 criteria covering materials, material reutilization, energy, water and social responsibility. He discussed fabrics being created that are safe to eat and trimmings become mulch for food production.

William McDonough's Keynote is below in 5 separate videos. Please ensure your system's volume is turned up. Article Photo by Mary Vincent