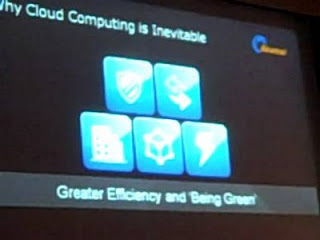 I attended the Structure09 San Francisco June 25, 2009 conference and came away with a variety of perspectives and videos. I've been using the Cloud to successfully operate and enable my businesses, and it can be Green if sustainably architected. It enables me to efficiently and cost-effectively operate my startup businesses while traveling and interfacing with clients. The Cloud is the present and future as long as it's secure. (Turn up your System's Volume for better video viewing.)

For those not familiar with Cloud Computing, Wikipedia states: Cloud computing is a style of computing in which dynamically scalable and often virtualized resources are provided as a service over the Internet.
The concept generally incorporates combinations of the following:
* infrastructure as a service (IaaS)
* platform as a service (PaaS)
* software as a service (SaaS) - Cloud computing services often provide common business applications online that are accessed from a web browser, while the software and data are stored on the servers.

Joe Weinman, Strategy and Business Development VP, AT&T Business Solutions and Structure09 Co-Host wrote the article: Peaking through the Clouds which also provides some insight. Data centers are of course an important part of cloud infrastructure. Google has built its own data centers and touts them as the most energy efficient. Here is the Google Data Center Best Practices Page for more information on efficient servers, efficient data centers, water management, and a document called "The Datacenter as a Computer: An Introduction into the Design of Warehouse-Scale Machines"

Panel: Databases to Dataspaces
During the 'From Databases to Dataspaces' Panel, Tasso Argyros, CTO and Co-Founder, Aster Data Systems stated that Software is important so you don't have to invest millions of dollars in infrastructure.
Project Voldemort, an open source, distributed database where the source code is available under the Apache 2.0 license was discussed on the Panel and is being used by Geir Magnusson, Consulting Architect, Platform, Gilt Groupe. The Project Voldemort website lists the following advantages:
* Voldemort combines in memory caching with the storage system so that a separate caching tier is not required, instead the storage system itself is just fast.
* Unlike MySQL replication, both reads and writes scale horizontally
* Data portioning is transparent, and allows for cluster expansion without rebalancing all data
* Data replication and placement is decided by a simple API to be able to accommodate a wide range of application specific strategies
* The storage layer is completely mockable so development and unit testing can be done against a throw-away in-memory storage system without needing a real cluster (or even a real storage system) for simple testing

Panel: Building the Perfect Host for Web Apps
A theme mentioned was that your technology could be great, but Operational Excellence is the Secret Sauce. The people you hire for agile development is very important. David Lipscomb, SVP, Engineering, NetSuite mentioned Three important things to remember:
* Design architecture for multi-tenancy
* Don't overengineer - use iterative Agile development
* Know your Partners technology - Make sure you're close to your Partners and understand their technology and services

Keynote: The Internet and Cloud Computing - Paul Sagan, President and CEO Akamai
Akamai receives 300 billion cloud requests every day. A portion of Paul's Keynote is in this video, and I've also listed some of his key points below.

Mininote: The Cloud in Context
by Russ Daniels, VP and CTO, Cloud Services Strategy, HP
Russ states we're moving from a Build-to-Order to a Configure-to-Order Strategy, and the following points:
* Cloud is the next phase of evolution of the internet
* Programatically accessible
* At low cost
* Solve problems that were too expensive to solve previously
A portion of his speech is here:


Panel: The Myth of the One-Size-Fits-All Cloud
The discussion led to the evolution of Clouds: the first evolution is pay-per-use; now there are industry-specialized clouds, i.e. Finance and Legal. Brian Doerr, CTO, Savvis states, "anticipate where you want to go; design your intentions for change for the long term."

Fireside Chat with Greg Papadopoulous, CTO and EVP, Research and Development, Sun Microsystems and Werner Vogels, VP and CTO, Amazon
Greg mentioned that "regulations may well determine where data should be and that authorities can always get the data...in the Madoff case, it was difficult to find the records."

Keynote: Marc Benioff, Chairman and CEO, salesforce.com
Salesforce makes $1 billion in revenue from cloud services, and I videotaped much of his talk in 2 Parts below. He discusses the importance of elasticity and lower cost as well as the Cloud evolution, including Diane Green, Founder of VMWare, who created the market for mainstream virtualization and the resulting virtualization software industry through present day Cloud examples. 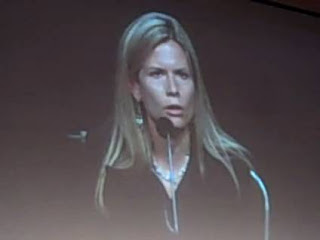 Michelle Munson, President and Co-Founder of Aspera, specializing in high-speed file transport was one of the panelists.
The panel gave an example where it was once cheaper for Netflix to mail videos. Now, it is cheaper for them to stream videos.

Panel: On the Shoulders of Giants
Vijay Gill, Senior Manager Engineering and Architecture Google discussed the advantage of in-house talent via outsourcing. He mentioned they had a problem with video and that it needed to be closer to the user. It was assigned to an in-house engineer who in three months developed a video distribution algorithim in three months mapping users to the closest video cache. He said, "It comes down to the right people, and that has to be in-house; you can't outsource it."