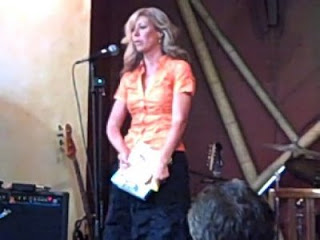 
History
We must recognize marine biologist and nature writer, Rachel Carson, one of the contemporary Environmental Leaders who wrote her 1962 famous book Silent Spring. Here is a quote from her book, "The more clearly we can focus our attention on the wonders and realities of the universe about us, the less taste we shall have for destruction."
Check out this must-see Bill Moyers' PBS Special Video on Rachel Carson.

Facts
Per the book Women in Green - Voices of Sustainable Design, research from Yale School of Forestry, American Progress Fund Institute for Women's Policy Research and American Election Study states:
- Polls consistently show that women are up to 15 percent more likely than men to rate the environment a high priority
- In political elections, women comprise up to two-thirds of voters who cast their ballots around environmental issues
- Women are more likely than men to volunteer for and give money to environmental causes, especially those related to health and safety within their own communities
- Women report both more support for environmental activists and more concern that government isn't doing enough to protect the environment
- More women than men support increased government spending for the environment, while men favor spending cuts
- Women tend to be less lenient toward business when it comes to environmental regulation.
- The modern environmental movement began with a book by a woman (Rachel Carson)
- The most popular definition of sustainability comes from a commission led by a woman who is also a strong advocate of gender equity (Gro Harlem Brundtland)
- The first person to use the word 'sustainability' with its current connotation was a woman (Gro Harlem Brundtland)
- Women were instrumental in the preservation and conservation movements in the U.S. as early as the mid-nineteenth century
- Some of the most important early proponents of systems thinking were women (Donella Meadows)
- The popular biomimicry movement was spawned by an influential book by a woman (Janine Benyus) See her TED Speech.
- The first woman president of the American Institute of Architects was also the first to herald sustainable design as the primary mission of the organization during her tenure (Sandra Mendler)

In addition to these facts and ground-breaking leaders, I wanted to add Wangari Maathai and Colleen Patrick-Goudreau to this discussion.
- Wangari Maathai, environmentalist activist and founder of the Green Belt Movement became the first African woman to win the Nobel Peace Prize in 2004. See her Yale Honorary Degree video where she delivers a lecture entitled "Environment, Democracy and Peace" describing her journey.

- Colleen Patrick-Goudreau, founder of Compassionate Cooks and author of The Vegan Table and The Joy of Vegan Baking is providing us the tools to create gourmet, healthy meals, educate us on where our food originates, and guide our food choices in order to stop animal cruelty and suffering. The United Nations Climate Change Report also states that animal agriculture causes more greenhouse gases than transportation. Every meal makes a difference.
Here is a video excerpt of her June 2009 speech about why she wrote The Vegan Table and some of her words from her speech and book:
"(there is)...something special about a gathering where no animals were harmed for the sake of our pleasure, when a sense of consciousness informs our actions, and our intentions reflect kindness and non-violence. When our thoughts turn to someone else's needs rather than our own desires, there is no denying that something profound takes place. In the absence of suffering, there is peace. In the presence of compassion, there is joy. That is vegan entertaining."

Have a Story/Video?
Do you have a Women's Green Voices Story/Video you would like to share? Let us know about it by commenting on this Post.