Carbon markets reached a value of $216 million in 2012, according to "State of the Forest Carbon Markets 2013" published by Forest Trends' Ecosystem Marketplace.

The Executive Summary key findings are:

• Over time, this report series has tracked 513 forest and land-use carbon projects. Developers representing 162 projects responded in 2013, including 62 projects never before reported.

• This report series has tracked a cumulative 134 MtCO2e of offsets transacted from forest carbon projects, valued at an estimated $0.9 billion over time from the carbon management of 26.5 million hectares.

• The private sector remained the largest source of demand, responsible for 19.7 MtCO2e or 70% of market activity. Two out of every three offsets were sold to multinational corporations. Businesses were motivated by offset-inclusive corporate social responsibility (CSR) activities, or to “demonstrate climate leadership” in their industry or to send signals to regulators.

• Demand for offsets from A/R projects remained high (8.6 MtCO2e) but fell from the prior year, while REDD offset demand grew for the fi rst time since the project type’s all-time high in 2010.

• The forest carbon markets extended project development to 58 countries, up from 54 locations in 2011. North American projects generated one quarter of all offsets transacted, while project developers in the Global South transacted half of overall market share.

• Projects seeking or achieving certifi cation to the Verifi ed Carbon Standard (VCS) transacted 15.7 MtCO2e, or 57% of all market activity. Around 12.2 MtCO2e of these sales were from projects seeking dual certification to VCS and the Climate, Community and Biodiversity Standards (CCB Standards). 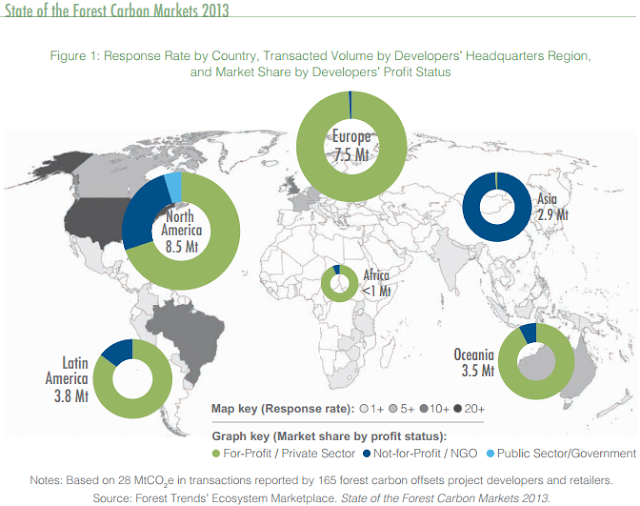